GURPS 3x3 Eyes (the 3x3 is pronounced Sazan) is a fan creation based on Yuzo Takada's manga series 3x3 Eyes that ran from 1987 to 2002 in Young Magazine with two OVAs based on the manga going up to the end of Volume 5 ("Return of the Seima III") in the original manga.

The premise of 3x3 Eyes is that there is a side branch of humanity called the Sanjiyan Unkara (meaning three-eyed mandala) who are so long lived as to be effectively immortal and who possess great magical powers. They lived on a parallel Earth (called Sanjiyan Unkara Holy Land in the Manga) that I dubbed Sazan and were possibly revered as gods.

The plot of 3x3 Eyes involves what is initially thought to be the last Sanjiyan Unkara (called Pai) looking for a three headed statue called the Ningen no Zou to become human. During this she turns a young man that helped her into her Wu--an unkillable guardian. Eventually they find out she is not the last and that the minions of her sleeping fiancee named Shiva (put to sleep at the cost of their own lives by her people around 1678 to stop him from taking over Earth) have their own plans for her and the Ningen no Zou.

If this wasn't enough there is another group that want to have Pai ascend to the status of Kaiyanwang--effective ruler of the Creatures of Darkness (all the supernatural beings that hide from humanity). To add to the fun there are portals (called Kunlun) between Earth and Sazan all over the place with the one to the capital city of Sazan in Tibet.

A Sanjiyan Unkara can, in theory, turn one person into a Wu though newly created Wu has no innate spells and must learn them.

A Wu is identified by the character "无" in the center of their forehead. Identifying this mark's significance requires actually knowing Hidden Lore (Sanjiyan Unkara) or Occultism and even then the information is not entirely correct. For example, one work on the Sanjiyan Unkara claims that they consume the soul of their Wu. In reality, the Sanjiyan Unkara is effectively a living phylactery for the Wu's soul and if the Sanjiyan Unkara dies they die as well.

A Wu can be extensively damaged and still function. The individual parts will "regenerate" until they look as they did when the person became a Wu.. However, the parts are limited to their ability to move on their own so if a Wu is blown to bits only the parts that have some way of moving (hands, arms, legs, feet) can do so.[1]

In fact, one time Yakumo annoyed Parvati to the point that she held his decapitated head as his body stumbled around trying to get to it

Yakumo trying to get his head.
Add a photo to this gallery

The 3x3 Eyes setting is very Low Fantasy with magic extremely rare. There is a slight Illuminated Fantasy bent to the world as demonstrated by Parvati going on a rampage on a Fei-Oh throughout a modern city (even being tracked by three police helicopters) and showing that she has three eyes in front of many witnesses but other then a handful of newspaper articles there is no mention of the events.[2] 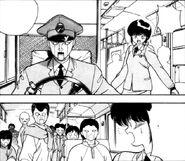 Its just a three eyed girl screaming her head off in a crowd. Nothing to see here. 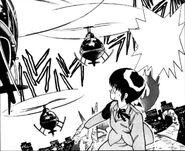 Its a normal situation to have three police helicopters chase a three eye girl on a giant flying tadpole thing.
Add a photo to this gallery

Many of these are Beast Magic spells. Translations in italics are through Google Translator.

Chin-Kuu
Add a photo to this gallery 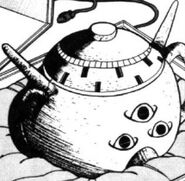 Shiva's Claw
Add a photo to this gallery 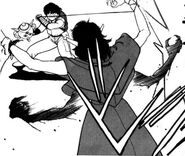 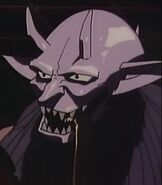 In the setting of 3x3 Eyes there are creatures that hide among humanity or serve such creatures. Collectively they are known as "Creatures of Darkness" and many, if not most, want power. Those that serve a Wu or Sanjiyan Unkara might be able to utilize some of them as contacts or even allies but they must first prove themselves.

A quick synapsis of most of the major Chracters was given in Chapter 417 (Volume 30) of the series.

The main character; has a Jekyll-Hyde like Split Personality (15) though it appears the Hyde like personality, Princess Parvati, can force her way to the surface when she is really annoyed. Pai initially has the disadvantages Clueless and Oblivious, while Parvati has Bully, Callous, Low Empathy, and Obsession (realize Pai's dream of becoming human; 6). Pai is so clueless that she doesn't understand idioms or see anything wrong with carrying around Professor Fujii's skull in her backpack.

Later on she is given Total Amnesia and the human identity Ayanokoji Pai which she lives for about 4 years but when she learns of her being Sanjiyan Unkara the Split Personality returns though the Amnesia now extends to her Parvati personality as well. This effectively removes all the mental disadvantages seen earlier on.

Pai's Wu. His father, Professor Fujii, was an archaeology professor who went to Tibet to study the legend of the Sanjiyans but died of natural causes after meeting Pai. He directed Pai to find his son to help her. Thanks to a thief stealing Pai's staff, in which her Takuhi lived, Pai had to make Yakumo her Wu.

Shiva's wu who was sealed by Madurai, the now former Wu of Parvati III, centuries ago.

A slightly pudgy balding Chinese man who dressed like Boris Badenov and used Rune Magic in service to Kaiyanwang Shiva. His goal was to destroy all the Kunlons limiting access to the Sanjiyan Unkara Holy Land where Shiva is sleeping. He disobeyed his master's orders and tried to kill Pai and was killed by her as a result. As a last resort he could transform into a demon like creature.

A secret trader in magic items who died saving Pai.

Nine-headed Dragon that once served Benares and was about to be executed for her failures. Saved by Haan Hazrat.

Parvati III's Wu who, after losing her Wu status, sealed Benares centuries ago in Wales. Still alive in present (1987) day she is a wizened old gambler living under the name Connelly.

Shunkai is a demon like being who lives under the human identify Huang Song Li (the real Mrs. Huang died years ago) who is a successful businesswoman in Hong Kong's peak district. In her true form she has talons, a tail and a single horn. She has a breath attack that can turn anyone it hit to stone but the effect can only be reversed by her death. While she answers directly to Benares she has her own agenda of making Pai the new Kaiyanwang and herself Pai's Wu.

Ushas is Shiva's mother but angered the previous Kaiyanwang so much that, 3,000 years ago she was exiled to space with her Wu tuning into a space station like thing to protect her.

A monster that replaced Pai on Barnes' orders but becomes one of Pai's strongest allies.

A child of a monster and a human who considers Youko his sister. 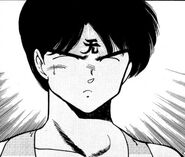 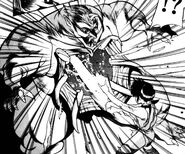 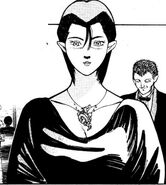 Shunkai in cerimonial robes
Add a photo to this gallery

It isn't that far a stretch to picture that the actions Sanjiyan Unkara are the basis for the deities of the Hindu pantheon but that raises an interesting question - what of the other polytheistic pantheons? In the manga Anubis appears as a Stone Golem so the idea that there were other "tribes" of Sanjiyan Unkara who were the basis for other polytheistic tribes is viable.

And if these pantheons were also based on other "tribes" of Sanjiyan Unkara then what happened to them? The answers to those questions can serve as a way for PCs to be Sanjiyan Unkara.

In a GURPS Vampire: The Masquerade like setting Cain can be both a vampire and a Wu - an effort by a Sanjiyan Unkara to have more then one immortal unkillable guardian. Given the mother of all vampires in Jewish Folklore is Lilith that may be the name of the Sanjiyan Unkara who made him a Wu. For an even darker tone have Lilith make the offer of becoming a Wu to Abel but finds Cain at the meeting place who states he killed his brother to prove his loyalty. Impressed by the action Lilith makes Cain her Wu...and the first vampire.

The 1938–39 German expedition to Tibet is in reality an effort to obtain Sanjiyan Unkara artifacts, magic, and if they are lucky an actual Sanjiyan Unkara (who Himmler thinks is the true Master Race rather then the Nordic races) Is anyone, Axis or Allies, ready for the realization of the expedition's true goals?

A variant is that Kaiyanwang Shiva doesn't come up with his plan to conquer Earth until the 1930's with both Axis or Allies trying to court him as an ally unaware that he plays to betray them.

The Next Step in HumanityEdit

Everything known about the Sanjiyan Unkara is a lie carefully crafted to hide the real truth - they and the things they "summon" are in reality the product of a mixture of bio-tech, cybernetics, and memory implants by a black ops organization with access to TL9^ technology. The goal of the organization is to eventually replace normal humans with the Sanjiyan Unkara.

Stories in the Five Earths, All in a Row settingEdit

Retrieved from "https://gurps.fandom.com/wiki/GURPS_3x3_Eyes?oldid=53292"
Community content is available under CC-BY-SA unless otherwise noted.