Various sovereignties contend for power on a magical world populated by storms blowing across the dimensions.

Unknown; possibly 150 million years ago, when Pangaea split differently. But the moon is different, too.

Banestorm is the current campaign name for the Yrth setting first presented in Man to Man as the world that Castle Defiant was located on. It was detailed in GURPS Fantasy 1st edition, expanded on in various adventure Supplements like Tredroy and Harkwood, then recompiled in the 1991 book Fantasy 2nd edition. With a couple of exceptions, no Yrth related materials were published after this until after the release of GURPS 4th Edition. The "Fantasy" book title was used in 4th edition as a tool kit source for GMs to build fantasy settings and the Yrth setting was released under the more marketable name of Banestorm.

Some additional materials can be find in GURPS Monsters

The world of Yrth was home to several sentient races and sub races. The main 4 races being Dragons, Elves, Dwarves and Orcs. The last three share a common religion and it is speculated that they are different branches from a common ancestor. This can be counter argued that the "Eternal" they all worship once was directly active on Yrth in it's ancient past and that the three always distinct races acquired their beliefs from that contact. Or any of a number of other speculations that fall between these two.

The notable sub races are Ogres for Orcs, Gnomes for Dwarves and Sea Elves for Elves. (It should be noted that prior to the publication of Banestorm, Sea Elves were simply Elves who lived on the coasts and worked the seas. Banestorm makes them a water and air breathing race which largely lives under water.)

The Dwarves moved underground and their surfaces dwelling cousins became Gnomes. Possession of the land surface was a constant war between Orc tribes and Elven communities. Over time a group of Elves dedicated themselves to the task of protecting Elves from Orcs. The 'Defender Cult' drifted from Mainstream Elves in three ways: They considered the other races to be inferior and beings not worth dealing with, took the attitude that traditional Elven ways were Superior and thus unchangeable and they then changed a major one of those Elven traditional ways by altering plats and animals with magic to make them better protectors of Elven forests.

In the Yrth equivalent year of 1050 ce, the Defenders took a step they'd been preparing for centuries and cast a spell designed to bring about the extinction of the Orcish race. To describe this casting as an epic failure is to be horrendously understating the event. The Elven lands in the west became the Great Desert. Similar but less potent disasters struck at other points where supplemental casting was being done.

And peoples and animals from other worlds began appearing in vast numbers. Of the Sentients, Humans and Dolphins from an Earth that may not be our historical one - Sentient Dolphins is an indicator. From Lor'endil came Halflings, Giants, Centaurs and Minotaurs. From Gabrook came Goblins and Reptile Men and Kobolds. Had not more than half the Elven population on the continent of Ytarria been erased from existence by the appearance of the Great Desert, the newcomer problem might have been put under some sort of control earlier on.

By the time things did settle down, Humans pretty much wound up running most of things. The Orcs are largely penned up in the North west, protected by the Desert. The Elves retain the Great Forest, the Dwarves, their northern mountain holdings, but not the southern ones. Goblins and Halflings have generally integrated within Human nations. Only a few regions are not under at least nominal human or humanoid control.

Two are significant: Djinn in the Southwest, ruled by Elven spirit beings fussed into human bodies, is the largest of such by area.

The Ring Islands, where magic is very unstable and powerful mystical beasts rule the jungles, which lie to the southeast of Ytarria.

Anything else lies beyond Ytrarria and that area is specifically reserved for individual GMs to detail.

In the GURPS Classic version of Yrth (when Magery was called Magical Aptitude) there was an interesting paradox created.

Further compounding matters is under 4e it is stated that "Less than 2% of humans have Magery, usually at a minimal level (Magery 0)"[1]. With the majority of the Ytarria continent at normal mana this is an increase by a factor of 4 (1/200 is 0.5%) from the numbers given in 3e for normal-mana area mages, making the numbers '2 in 25 might know a spell or two in a high-mana area, 1 in 25 in a normal-mana area, 1 in 125 in a low-mana area'.

Why would anyone in a normal-mana or low-mana without Magery learn a skill that in that area they would never be able to use? The only way that statement makes any sense is if the early form of "Clerical" magic where followers of a deity could cast spells as if they were mages without having Magery existed on Yrth.

In 4e it is expressly stated that Power Investiture is unknown on Yrth but elsewhere it is stated that Ritual Magic does exist on Yrth, with the Closer To Heaven talent providing a bonus to the skill.[2] Maxed out to +4 this puts non mage Ritual Magic wizards at only a -1 compared to their mage counterparts.

The only thing is “Fractional” Magery 0 is far cheaper in terms of points (ie time) then Closer To Heaven (+1/level vs 5 or 6/level) but allowing that would run headlong into the whole only half the people who know spells have Magery (of any type) issue.

Yrth exists as a parallel world to Earth, and is known to Infinity as a Fantasy parallel in Q5 , with a divergence point that probably occurred when the Pangean supercontinent existed. It is also a 'Sargasso' parallel that will let Conveyors enter, but not exit and the escape by the first team of explorers was achieved by Yrthian Magic. 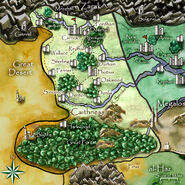 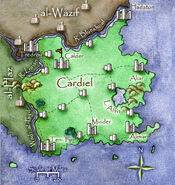 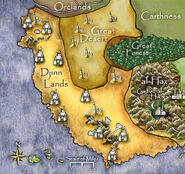 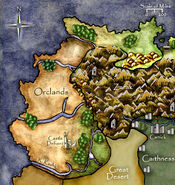 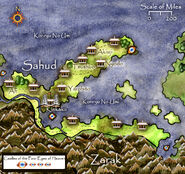 Ytarria Mana Levels
Add a photo to this gallery

Retrieved from "https://gurps.fandom.com/wiki/GURPS_Banestorm?oldid=45832"
Community content is available under CC-BY-SA unless otherwise noted.